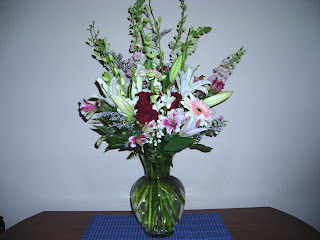 Like all adult male children, my son, Brent, doesn’t call nearly often enough. He rarely remembers birthdays, Mother’s and Father’s Days or anniversaries. He can look pretty intimidating; he’s 6’4”, “buff,” has some tattoos, which are never acceptable to moms. But at least, no piercings are involved! Whew! Dodged that bullet.

Whereas The Saint and I always have our noses in some book or other, Brent is never happier than when he’s building something or taking something apart and then putting it back together again. But underneath that Harley-Davidson kind of macho bravura is the sweetest, most family-oriented, traditional guy. He’s the one who not only insists on a Thanksgiving celebration but does all the cooking! And can he cook! He and his father have always been competitive, so any family gathering is a contest to see whether father or son prepares the tastiest, most innovative dish while both protest that they’re not competing with each other. Right! Brent’s wife, Karen, and I are the lucky recipients of their competition.

Brent is one of those artistic, creative cooks who leaves the kitchen like a tornado just blew through. The Saint, on the other hand, is unreasonably neat and orderly. An unwashed pan can make him break out into hives. In this regard, he is not unlike “Monk.” Once, at Brent’s house, The Saint thought the refrigerator was “messy,” so he cleaned and organized it. Brent swears that he alphabetized the contents. Might not be an exaggeration.

When his dad, The Saint, was rushed into the hospital for a ruptured aortic aneurysm, the doc told me his chances for survival weren’t good. But The Saint, every bit as stubborn as his son, did survive. Brent just handled stuff for us. Everyday, practical stuff. This is one moment that I remember with great clarity and gratitude. He was horrified to discover I didn’t even have my own ATM card and insisted we go immediately to the bank and get one for me. The bank person told us my ATM card would be mailed to me in 10-14 days. Brent pulled himself up to his full 6-4” height and buffness and said in the nicest possible way, “Oh, she needs it today. I think you can find a way of expediting it, don’t you?” And he flashed that killer smile of his. Of course I walked out of that bank with a fully-operational ATM card.

Lately I’ve been a little blue. Nothing terminal, mind you. Just nostalgic and blue and missing my family. When this lovely Mother’s Day bouquet from Brent and his family arrived, I just sat down and bawled. But it was the good kind of crying. It was the kind of crying that said “He turned out to be exactly the son I always wanted.”

For all the moms out there, Happy Mother’s Day. Delight in your children and hug them tightly!
Posted by Oblique Angles at 1:30 PM

Oh, great, now you have ME crying. Good thing I didn't see this post yesterday, I'd have blubbered all over the bassinet project. Beautiful post, beautiful flowers. Isn't it just the best when you look up and the kid who ran a lamp through the washing machine has grown into a finer man than you could have ever imagined. Amazing.

Sigh, you've gotten me all nostalgic and sentimental too. To have your children grow up to be people you can be proud of is not to be under-estimated!
Your Mother's Day is already blessed may it be a happy one too.

Happy Mother's Day to you, too. It's so nice to hear that I may come out on the other side of this teen angst with a fine young man, too. Thanks.

Kids - they grow up to surprise you, don't they? It's because we're such good parents. AND very, very lucky!!!