Excitement mounts as Beijing prepares for the 2008 Olympic Summer Games. Certainly one of the reasons for this anticipation is the inclusion of Grocery Shopping as an official event.

In a nutshell, there are two phases to the competition. In the Compulsory round, the competitor is given a list of 48 grocery items, and she must locate and place them in her shopping cart. Whoever gets to the check-out line first wins that round. In the Artistic round, whoever takes longest at check-out, wins that round. The scores are combined to determine the winner.

In order to prepare the viewer for this event, we have taken our cameras (actually, we don’t have cameras, but it sounds pretty lame to say we have taken our pens and notebook) to Dubuque to follow Donna Dilbert, America’s great hope in this event, as she trains at her local supermarket in her quest to bring home the Gold.

When she entered the Piggly Wiggly, the staff and customers cheered her on. Go, Donna go! She was all business as she tested the cart, checking each wheel, making sure they all went in the same direction, not one of them veering off on its own agenda. Proclaiming her cart fit, she grabbed the grocery list from the store manager. As she studied it, the crowd’s enthusiasm grew. Go, Donna, Go! With a dazzling smile, Donna, mentally prepared and psyched, was off.

She snatched items off the shelf, tossing them into the cart, never even slowing down. Her pace was fast and steady. Whomp! There go the bagels! Whomp! There goes the casaba melon! Around the end of the aisle to the frozen food. Whomp! Sara Lee Cheesecake. Yum! Frozen okra. Bleck!

And then Donna stopped. A troubled expression frozen on her face.

“What is it, Donna?” an adoring fan asked.

There was stunned silence. The fans had never seen their girl stopped before. Tick, tick, tick. They knew they couldn’t tell her the location. Suddenly, as if by divine intervention, a stock clerk piped up. “Wow, Donna, then you really are in a PICKLE Yep, a real PICKLE alright.” Picking up on his clue, Donna beamed and dashed off to the pickle aisle. She had lost valuable time. In a gutsy strategic move, she placed her cart sideways across the aisle so other shoppers couldn’t get past. She spotted the elusive capers, tossed them into her cart and was off again.

Checking and re-checking, she now had all 48 items in her cart and was off to the check-out counter. What?! She wasn’t first. Donna was now in third place. She could have given up, but she didn’t. Although it wasn’t likely, she knew she might be able to win enough points in the Artistic phase.

Throughout the checkout process, Donna, seemingly relaxed, chatted with the cashier. “Pretty earrings, Laverene. Where’d you get ‘em?”

Fans were shocked. Donna had gone through the checkout process too quickly. This wasn’t the way to win a competition.

Then, and only then, did Donna open her purse.

“Oh my,” she said. “Will you look at this? All my change has fallen out of my wallet.” Racking up points as seconds ticked away, Donna scrambled around in the bowels of her purse, bringing up a quarter here, a nickel there. Finally, after eight minutes (Donna’s personal best), she counted out the money. Ninety-eight dollars...and I have the exact change…twenty-five, fifty, sixty, seventy, seventy-five, eighty, eighty-one, eighty-two, eighty-three, eighty-four, eighty-five, eighty-six, eighty-seven and eighty-eight!” She managed to add another important one minute and thirty-two seconds to her already impressive score. As Donna was about to close her purse, she uttered the absolutely winning words. “Oh, I forgot, I have coupons!”

And that, dear reader, is a true champion!
Posted by Oblique Angles at 3:08 PM 6 comments:

THE BOOK IS FINISHED! -- WELL, SORT OF 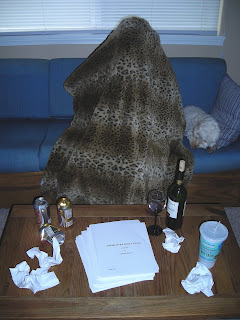 It’s taken over five years, but I’ve finally finished my second novel, BOOBS OVER HOLLYWOOD! I should be jumping and leaping and twirling and doing cartwheels. Instead, I just want to retreat to My Beloved Sofa and cover my head with a blanket. Maybe even a wet one.

Alas, it also signals the real beginning of the work.

Now I must write this diabolical document called a Query Letter which will go to agents and/or publishers. The Dreaded Query Letter has very specific requirements: The first paragraph must hook in the reader, compel them to keep on reading. Within one sentence I have to capture not only the meaning of the entire 350-page book but I also have to demonstrate “a unique voice.” I suspect they don’t mean Fran Drescher’s voice. Paragraph 2 is a one-paragraph summary of the 350-page book. Oh sure, that’s easy. If I could have written the darn thing in one paragraph, I would have. It would have saved a whole lot of time and paper. Paragraph 3 is a bio, telling the reader why I am the only person in the entire galaxy who could have written such a masterpiece. Apparently this is not the time to be humble or modest. Paragraph 4 thanks the reader for their time and consideration and encourages them to send for additional material – like the book, for instance. ALL THIS MUST BE DONE IN ONE PAGE!

… I need to find another line of work. Perhaps hod carrier… Now, if I only knew what a hod was…

…or how about shepardess?

Finally, I must check the submission guidelines of every single agent/publisher to whom I am submitting my book. Each agent and publisher has come up with their own diabolical, ridiculous set of guidelines. Some want just a query letter; others want a query letter and the synopsis; and still others want just the first page of my novel; others want to see ten pages, or three chapters or fifty pages; nobody wants to see the whole book; others would like me to do sommersaults backward through a series of flaming hoops while instructing a herd of elephants on the skills required to play the oboe; still others would like me to drop dead. And of course, I must enclose a self-addressed stamped envelope. See, you get the privilege of paying their postage so they can tell you that they want absolutely nothing to do with you. This seems to me to be the literary equivalent of pouring salt into a wound.

…maybe a sprinkler of fairy dust?

Okay, I’m ready to do a mailing. I’ve assembled The Dreaded Query letter, my synopsis, and whatever other cockamamie requirements the agents and publishers want. I also have that just-completed 350-page novel in front of me, which nobody wants to see. I assemble, collate, stuff, address envelopes and send my precious book into the world, which by now I am convinced is probably the worst book ever written in the whole history of the world. Actually, I’m not sending my precious book; I’m sending documents ABOUT my precious book.

…maybe putting the Inspected By labels into Jockey shorts?

And now I wait. And wait. And wait. When my writing partner and I wrote our first book LETTERS FROM CLEO AND TYRONE, it took St. Martin’s Press 18 months to get back to us. Good grief, I could have had two babies in that amount of time.
So, the question you must be asking yourself is why, oh why, did you ever decide to become a writer in the first place. It seems way too stressful. And it also seems you could go broke waiting for someone, anyone, to decide they want to publish you. And you would be right. Hmmm… Let me ponder this. This must be some reason I chose to be writer. Hmmm… I’ll have to get back to you on that one. Do you know anybody who needs a hod carrier? Do you know what a hod is?
Posted by Oblique Angles at 7:49 AM 4 comments: