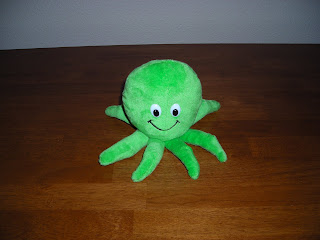 As you know, I always try to maintain a positive attitude, but as project leader, I would be dishonest if I didn’t tell you how demoralizing this project has been for the entire design team. Designing new critters is becoming increasingly difficult. Chad argued that all the good, useful creatures have already been designed: oxen, horses, camels. All that remains are the whimsical and frivolous. As the only parameters we were given were that it must have eight legs and live in the sea, our work was certainly cut out for us.

First, we had to consider the critter’s shape. Cindy suggested square – a leg at each corner and a leg in the middle of each side. Brad opted for a long thin rectangular shape with four legs on each of the two long sides. Cindy and Brad got into a quite a row, Cindy arguing that Brad’s design was highly derivative of the centipede. She worried the centipede designers, who have always been such prima donnas, would whine we had stolen their idea.

Chad then suggested a triangle, but we couldn’t figure out a way to put eight legs on three sides. In a stroke of genius on my part, I offered a circle as a viable shape. The eight legs could be spaced evenly around the circumference. All agreed that the simplicity of my design was brilliant.

Next, we had to consider the shape and size of the head. The poor creature had enough going against it with those eight unwieldy legs. He didn’t need to be called “pinhead” on top of it all. We opted for a big head. A huge head, in fact.

Next came the body. Since it was getting late and everyone was anxious to get home to watch American Idol, we quickly decided it didn’t have a body. All those legs dangling down from that big old head would surely be enough.

It did occur to me as I preparing this report that the octopus could be used as a decorative windsock for the front porch or patio. You might want to run that by Marketing.

Cindy also suggested adding suction cups to the underside of each leg. She thought if the octopus became a popular icon – like Garfield, for instance – with the aid of the suction cups it could easily be converted in a car window ornament. It did occur to me that unless the octopus was downsized considerably, it would seriously limit visibility and prove to be a driving hazard. Between you and me, Stanley, I thought Cindy’s idea was pretty goofy, but you know how she pouts if she doesn’t get her way so I promised I’d include it in the report.

We did take a quick glance at our next assignment. A kind of large horse-like critter with a ten-foot neck. You’re kidding, right? Chad was predictably upset. We were able to calm him down with a double decaf non-fat mocha cappuccino laced with Prozac. Although I’m more focused and centered than the volatile Chad, I, too, must question what’s next. A tall, leggy orange bird that sleeps standing on one leg with his head tucked neatly under his wing? Or a huge potato-shaped mammal that lives in the Everglades with a propensity for doing battle with Evinrude outboard motors? What a card you are, Stanley! You slay me. You really do.

Regards,
Linda
Posted by Oblique Angles at 11:17 AM

LOL You are an amazing writer -- funny and acurate! This hits corporate interactions squarely on the head. I found myself feeling so sorry for poor brad.

:lol: what next indeed ! thank you for my morning guffaw.

How about a slow, slothful, greyish brown creature that eats circles out of leaves and grows so big in the Pacific Northwest that it looks like dog doo doo while it crosses the lawn. That would be a big seller I'm sure. Especially if you could somehow work out a slime activator.

What a good point you make! I'll bring it up to my boss. What shall we call such a creature? Let's see. It's dull and sluggish and slimy. We could call it a dullard or a slimer... Oh, wait! We'll call it a slug! Thanks for your input. Maybe you'd like to come and work in critter development. It's really quite challenging.

Critter development. Now, I've seen everything. This is hilarious!

i would be very happy to help you out in Critter Development but only on a consulting basis. You know where I come in for a very short time, have a catered lunch and tell you all what you should do, then you pay me an exhorbitant amount of money and then I leave to go on an extended holiday to some warm tropical place while you guys figure out all the boring details.. If that's what you were thinking, then ,yeah, I'm in.