MY DAFFODIL IS DEPRESSED 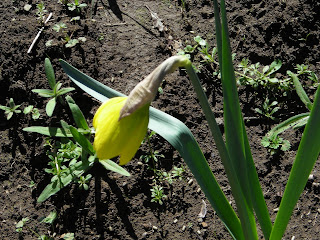 When we lived in Los Angeles, we were apartment dwellers. The extent of our gardening was throwing a geranium in a pot and putting it out on the never-used patio. If we noticed it was seriously drooping, its little arms stretched out, pleading for water, we would water it. But that was all we did. No food. No barbequed spareribs. No creme brulee. No fertilizer. No TLC. She was an independent, self-sufficient geranium. Without any assist from us, she was a survivor.

When we were looking for a rental in Philomath, OR, we stumbled upon a delightful brand-new duplex. It was clean and fresh and sparkly. There was a room that was shaped exactly like a funnel. It served no discernible purpose other than as a conversation starter. The Saint and I were both taken with that room and just HAD to live here.

The Earnest Young Landlord said in the interest of full-disclosure, there was something he had to show us. He dramatically opened the blinds onto the patio. And there it was. A backyard. A big backyard. A big backyard that was entirely mud and weeds. Now, to be completely honest, some folk wouldn't consider it huge, but if your frame of reference is one potted geranium, to us it seemed like Tara. The Earnest Young Landlord was apologetic. He wasn't a gardener either. He just wanted us to be aware of it.

And so we thought, well, gee, how difficult would it be to plant a garden of some sort? The backyard sloped at odd angles so a lawn seemed out of the question. The Saint didn't relish the idea of vertical mowing. We started hanging out at nurseries, eavesdropping, asking endless questions. It turns out that plants are a very diverse lot with very strong likes and dislikes. Some plants preferred morning sun, some preferred afternoon sun, some would rather be in Aruba. One liked to be moist all the time; one liked to dry out completely between waterings and another one fancied a tanning salon . This one liked bone meal, the other one thought there was nothing finer than a grilled cheese sandwich. And then they all had different lifespans. This one would die at first frost, one would be resurrected after the last frost, and yet another would go to Palm Springs for the winter.

Okay, too many choices. Too much information. We bought daffodil bulbs. Lots and lots of them. The Saint followed directions slavishly. He planted them mid-November, placed them four inches beneath the ground, fertilized them.

And then we waited. While daffodils were blooming all over town standing up tall and straight, saluting and celebrating the beautiful new season, ours bloomed and...well, drooped. We'd stare at them for hours, offering them words of encouragement, playing soothing music. We coaxed, cajoled, juggled, did cartwheels. Nothing. Just droop, droop, droop.

I believe the only viable solution is to close the blinds and forget the concept of a garden. Maybe the daffodils will do better if left to their own devices. Maybe they need privacy. Maybe they're depressed. And just maybe we should take up another hobby.
Posted by Oblique Angles at 5:42 PM 5 comments:

SEAGULL LEGS AND A RICH ITALIAN 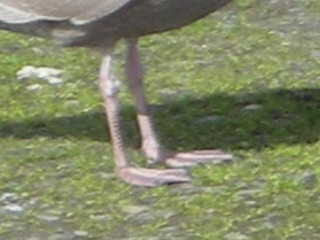 Several years ago, my husband, The Saint, and I found a delightful restaurant in San Diego. It was a seafood joint called Point Loma Seafood. The fish was fresh, the prices cheap, and the place was always packed. One evening I noticed a photograph on the wall. It was a photo of seagull legs and feet. I found this endlessly amusing.
This was very much on my mind when we took our first trip since Winter over the coastal range from Philomath, OR to our favorite beach town of Newport, OR. I was determined to get that elusive shot. One would think I would have more important, more meaningful things on my mind. Alas, I do not.
On a deserted jetty, we found a whole herd of seagulls just standing around, apparently waiting for their close-ups. Hunkering down on the ground, I took shot after shot of seagull feet. Suddenly, a voice startled me. "What're you doing, woman? Why are you taking photos of stupid seagulls?" I looked up and there was a grizzled old guy, carrying a fishing pole. He looked for all the world like someone who should be featured on a package of Gorton's Fish Sticks. "Further," he continued, "it looks to me you're not getting a picture of the whole gull -- just his feet." I smiled. "Yes, that was my intention," I said. He studied me for a moment. "You from Callyfurnia?" he asked. "Why, yes I am," I chirped. "Figures," he said as he wandered off, shaking his head.
Exhausted from our extreme photographic efforts, we went to Mo's in Newport. Established in 1944, Mo's has been serving up delicious clam chowder and other seafood dishes to people from all walks of life. Because it's such a tiny little restaurant, you eat at communal tables. You might be sitting next to a diamond merchant from Amsterdam, a cowboy from Wyoming or two travelling evangelists.
As The Saint was studying the menu, he erupted into loud, hysterical laughter. "You find the menu amusing?" I asked. In recent months, we have discussed that we are both way too easily amused. He nodded, tears of laughter running down his face. "Look!" he said, pointing to an item on the menu. It said. "Cioppino. A seafood stew served with a rich Italian." That's exactly what it said. The waitress came over and asked if there was a problem. The Saint said, "Can we take the rich Italian home with us?" She explained it's been on the menu like that for years. She didn't know if the original typo was intentional or not. What amazed her is that although many folk order the cioppino, they almost never comment on the "rich Italian."
As we tucked into our clam chowder, we congratulated ourselves. A shot of seagull feet, clam chowder and a rich Italian. How could a day possibly be more perfect?
Posted by Oblique Angles at 6:18 PM 3 comments: