The Problem With Lying... 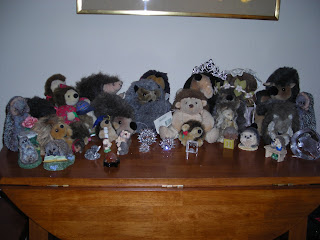 It all started in the mid-80's. I was working in New York, missing my California home. A friend had just opened a chic, trendy animal collectible shop in chic, trendy SoHo. Stuffed animals of every stripe were there. "And what animals do you collect?" my enthusiastic friend asked. Actually, I didn't collect any stuffed animals, but I felt obligated to purchase something from her. Not teddy bears. Too predictable. Same with kittycats. Nothing disgusting like an armadillo. And most important, I didn't want something that was so popular that I would feel obligated to be in the shop every week buying another panda or koala for my collection. "Hedgehogs," I blurted out. "I collect hedgehogs." I don't know where that came from because I don't ever recall seeing a hedgehog and I had absolutely no idea what they looked like. My friend looked perplexed for a moment, then a huge smile eruped. "We have a hedgehog, but only one." Perfect, I thought. She came out with a critter that kind of resembled a small possum. "Look at his perfect little porcelain nails," my friend proclaimed. "How adorable," I mumbled. And so I had a hedgehog. One hedgehog. I certainly thought that was the end of it. But, of course, that was not to be. Word got out that I "collected" hedgehogs. Since when does one hedgehog constitute a collection? Every birthday and Christmas thereafter, people have gifted me with hedgehogs: stuffed ones, plaster of paris ones, crystal ones, lead ones. I even have a suede purse shaped like a hedgehog, and sometimes, just to be contrary, I actually wear it! Just recently we moved to Oregon, and for one moment, I thought this would be the perfect opportunity to dump the hedgehog collection. But when it came right down to it, I couldn't do it. So, after all these years, of a pretend-collection, it occurs to me that I really do have a hedgehog collection and I'm darned proud of it.
Posted by Oblique Angles at 9:03 AM 3 comments:

Do young folk really believe that when grey hairs start sprouting from your head that the grey cells simultaneously fall out the back of your head, following you around like a bad case of dandruff?

The other day I was in the electronics department of Target, wanting to purchase a 5-disc changer. I said to the young man behind the counter, "Please, sir, can you please direct
me to the 5-disc changers?"

"Certainly, ma'm," he said cheerfully and led me to an impresssive display of...well, boom boxes. "Here you go."

"They're the same thing. Just different names. Maybe you called them 5-disc changers when you were younger."

"When I was younger, I didn't call them anything, because they hadn't been invented!"

"They've been around forever. You probably just weren't familiar with them."

"Au contraire, mon ami," I said. "In the whole history of the world a boom box and a 5-disc changer have never, ever been considered the same thing." I could feel the volume of my voice increasing and developing that strident quality that sends neighborhood dogs fleeing. "That's as stupid as saying an electric can opener and a Mixmaster are one and the same thing." I do believe I was pretty much shrieking at this point.

"M'am, you need to calm down." I think until this point he thought he was just dealing with a harmless little old lady.

"And you need to stop being such a patronizing, uninformed jackass. I'm taking my business to Circuit City. The folks over there are bright enough to know the difference between a boom box and a 5-disc changer." With that I thwomped him over the head with my walker.

I recently had someone read something I had written. They didn't know a word I had used and suggested I change the word. What?! As a writer, am I supposed to keep track of each reader's words? Oh, I think not. I am not responsible for supplying the reader with a dictionary; nor am I responsible for their ignorance!
Posted by Oblique Angles at 3:43 PM 3 comments: 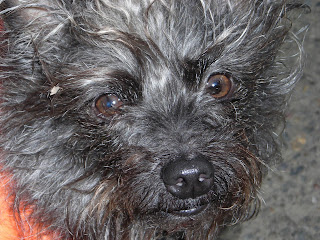 Spenser, a rescue dog, is of indeterminate lineage. When I first got him, he was a year old and weighed in at about 6 pounds. Skinny and frightened, he did not look like he had had a very good year at all. He was a bundle of fears and nerves. He just knew folk were out to hurt him. People would make strange ewwww kind of faces when they saw him. WHAT IS HE? I used to tell them that his mother was a fruit bat and his daddy was a werewolf. From the looks on their faces, I think they actually believed me.

Spenser is six years old now, and he is a contented happy dog, who has doubled in size. His best buddy in the world is Archibald McNalley, who is his hero. They make a very handsome couple: black and white, ebony and ivory, salt and pepper. Now a robust 12-pounder, he is very protective of his family. If anyone is going to harm any of us, they're going to have to get past Spenser, Vigilante Dog.
Posted by Oblique Angles at 1:44 PM 2 comments:

Welcome to my blog! 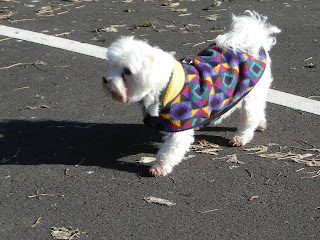 Welcome to my blog!

And to think I didn't even know what a blog was ten minutes ago, and now I have one! Ah, modern technology. Almost -- but not quite -- as good as a grilled cheese sandwich!

And now I have to figure out what I will do with this wondrous new toy. Here I can write my silly, goofy stuff; I can rant and rave; I can show off the two best dogs in the whole world. The Amazing Archibald McNally, a singularly gorgeous Maltese, and Spenser For Hire, a dog of indeterminate lineage who looks like a fruit bat and a werewolf got together to create this masterpiece.

Posted by Oblique Angles at 9:38 AM No comments: