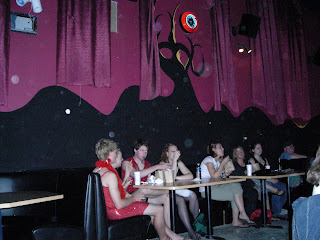 Avalon Theater, Corvallis, Oregon, closed its doors for the last time last night. Targeted at folks who enjoy independent films that don’t necessarily feature high-tech gadgetry and over-the-top budgets, the Avalon was a pleasant break from the big multiplexes with their mega-hit films and over-priced tickets and snacks. I’m pleased to say the Avalon went out with a loopy, fun-filled bang.

Three performances were scheduled for the final day. Part celebration and part money-raiser, the proceeds were to be used to pay back-rent. At 3:00 CINEMA PARADISO was shown. Then at 6:00 and 9:00 pm THE ROCKY HORROR PICTURE SHOW was to play. Hard to believe TRHPS is now 32 years old. It might be fun to take a trip down memory lane. Perhaps it will make no sense at all. Perhaps it will seem really stupid and dated. Perhaps it will make me feel older than dirt. Perhaps we’ll have a dandy time.

When we arrived at 5:30 for the 6:00 show, there were already people in line, wearing their costumes, carrying their props. Paul, the owner, came out about 5:45 and said CINEMA PARADISO was running a little late, so probably our show wouldn’t start until about 6:15. A little after 6:00, his staff came out with bottled water for everyone in line. The next update stated the show probably would start “somewhere around 6:30 or so.” This announcement was accompanied by popcorn and an explanation of what had happened with CINEMA PARADISO. Paul had received his copy from his distributor. When he ran it, he discovered the film was damaged and there wasn’t time to return it to the distributor and have a new one shipped. So he went down to the local DVD rental place and picked up a copy. Who knows what version this was, but the darn thing ran 3 hours! I’ll bet it was the Director’s Very Self-Indulgent Cut. Just a wild guess.

Finally, the CINEMA PARADISO audience exited the theater, looking as if they had just awakened from hibernation after an extremely long, harsh winter.

I had never been to this theater before, but I was absolutely charmed. Restaurant booths lined the sides of the theatre. There were several rows of standard theatre seating, but there were also couches and recliners. We found a particularly comfy couch at the back. The décor was just fun: crystal chandeliers hanging here and there without apparent rhyme or reason, a table lamp hanging upside down from the ceiling, its base affixed to the ceiling. Think a 60’s psychedelic coffee house mixed with the Mad Hatter’s Tea Party, and you pretty much have the flavor of the place.

When the movie started, I could have sworn it was 1975 again. The audience shouted the same lines, had exactly the same props, wore the same costumes. It reminded me of an oral history that had been passed down from generation to generation. The list of props included rice, newspaper (preferably The Cleveland Plain Dealer), water guns, lighter/flashlight (I noticed last night, several participants opened their cell phones for light), noise makers, rubber gloves, confetti, toilet paper (preferably Scott), toast, bells, playing cars, condoms. “Let’s do the Time Warp Again…”

Just as the movie reached its climax, the projector broke down! Nobody screamed and yelled and had some stupid temper tantrum. In fact, Paul came out and asked if the audience would scream and yell as it might prompt them to work faster.

I know this could never have happened in L.A. People there are too impatient and equipment break-down of any kind is simply not tolerated. Dollars to donuts, some fool would file a lawsuit. The good folk of Corvallis, on the other hand, simply made every little inconvenience and delay a reason to prolong the party.

I’m so glad we had the chance to see the Avalon before it closed. Leaving, I turned to take one last look. I swear I could feel years and years of memories lingering there, as reluctant to leave as I was. Perhaps they will demolish the building – oh, I hope not – but those memories will live forever. Thank you, Paul! Thank you, Avalon!

Linda,I love this story. Small town theaters are so intimate and personal -- and to show THE ROCKY HORROR PICTURE SHOW for the farewell is perfect -- what other film would have been more appropriate. Good luck Paul; Farewell Avalon.

Isn't it sad that places like that can not survive? It's like the small Mom and Pop stores that were wiped out by Wally and malls. Sigh.

It's wonderful that you were able to go and enjoy it before it passed away.
...and I'm glad you're back too LOLx2

Hi, this is not so related to your page, but it is the site you asked me 1 month ago about the abs diet. I tried it, worked well. Well here is the site

Hello. This post is likeable, and your blog is very interesting, congratulations :-). I will add in my blogroll =). If possible gives a last there on my blog, it is about the Celular, I hope you enjoy. The address is http://telefone-celular-brasil.blogspot.com. A hug.

hi mate, this is the canadin pharmacy you asked me about: the link